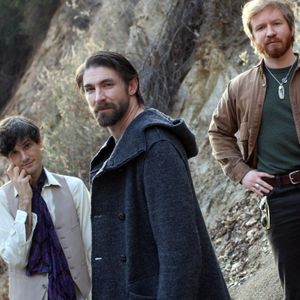 Las Cruces, NM
I Was There
About Raqia
Hometown:
Los Angeles, California
RAQIA is an instrumental trio formed in Los Angeles in
the summer of 2018. Consisting of guitarist Tad Piecka
(Beware of Safety, Petrychor, Wizzrobe), violinist
Gregory A...
Read More

High Desert Brewing Co.
1201 W Hadley Ave, Las Cruces, NM 88005
In an age of rising chaos and encroaching darkness, RAQIA seeks to create sanctuary and connection with the natural world through music. Weaving between structured compositions and open improvisation, this is music of and for the elements. Guitarist Tad Piecka, coming from a background of post-rock and black metal, here infuses his lightning fast finger-picking skills with a strain of folk and Americana, enhanced by his focus on the 12-string acoustic. Violinist Gregory Allison combines his experiences with folk and chamber pop with his training and background in Carnatic music, bringing a fluid and emotional fire to the group’s sound. Jon Bernstein, primarily known for ambient and cinematic soundscapes and sound design in the audio drama space, here focuses almost entirely on piano, drawing from styles that range from neoclassical to pop music. As a group, these three merge organically to create a new sound that acknowledges their diverse influences while establishing a space that is very much their own.


RAQIA’s eponymous first album, released in December of 2018, showcases the trio’s range, from the ambient soundscapes Kinship and Subspace that open and close the album to the folk-infused complexity of You Are A Sky of Autumn, Pale, and Rose. Currently, RAQIA is preparing to record a new album and tour California, Arizona and New Mexico in February.
View All Raqia Tour Dates
About Raqia
Hometown:
Los Angeles, California
RAQIA is an instrumental trio formed in Los Angeles in
the summer of 2018. Consisting of guitarist Tad Piecka
(Beware of Safety, Petrychor, Wizzrobe), violinist
Gregory A...
Read More