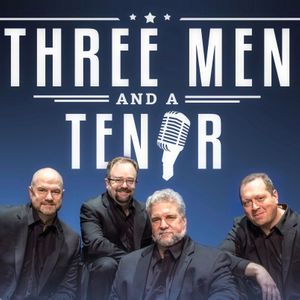 THREE MEN and a TENOR

Live from Charlevoix - Charlevoix Cinema III
116 Michgian Ave, Charlevoix, MI 49720
Three Men and a Tenor has been a pop musical group for over 28 years. Ups and downs. Fights and fun. Marriages and children. Used cars and equipment trucks. Somehow, making it all work. Same original founding members. Same simple goal of making people feel better through a couple of hours of musical interaction and laughter. Come see a show and see what so many have enjoyed over the years, and expect that you will feel better- it is an experience that you can't help but enjoy and want to bring others to enjoy as well. For how many more years, who knows. But for now, you should catch it while you can.

About the show:
Great pop vocal music, quick-witted humor and overall likeability make THREE MEN and a TENOR a unique show experience for audiences that cannot be matched. The group has a national touring schedule and has opened shows for national legends like Jay Leno and The Beach Boys; performed the national anthem to start the NASCAR FireKeepers 400 on FS1, and had its own national PBS-TV special ("Three Men and a Tenor- In Concert") that was shown across the country from Los Angeles to Nashville.

THREE MEN and a TENOR has regularly sold-out shows at performing arts centers, historic theaters, and festivals and fairs for over 28 years with a powerful blend of vocal harmonies and feel-good music for all ages.