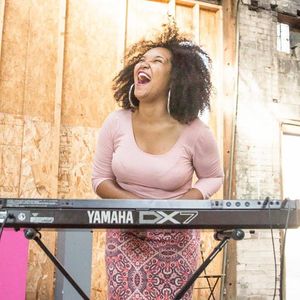 ALEXIS LOMBRE is a young jazz pianist who discovered early that the true essence of music is not just about what you hear but how music makes you feel. Her musical mission is to keep the ‘Soul’ in music alive. The 2017 release of her debut album, Southside Sounds, does just that, as it is a soulful reflection of her upbringing on Chicago’s Southside. In the May 2019, Lombre toured the Midwest with her group, the Alexis Lombre Trio, and in January 2019 she toured South Africa with Englewood-Soweto Exchange that was powered by a MacArthur grant led by Ernest Dawkins. In 2017 she toured France with Bacongo Square Boulevard, a trio comprised of French, Congolese & American musicians. She has also played with internationally known musicians such as: James Carter, Ernest Dawkins, the AACM Great Black Music Ensemble, Makaya McCraven, Junius Paul, Bobby Watson, Buster Williams, Wadada Leo Smith, Dee Alexander, Rudresh Mahanthappa, and Nona Hendrix.
https://www.alexislombre.com

Born from two Detroit Jazz musicians, Mecca Lathan and Zion Yisrael, Isis Damil was destined to have music in her heart. All through her life she has been blessed to play with great musicians including her parents, Larry Smith, Marcus Belgrave, Michael Jellick, Ralphe Armstrong, James Carter, Robert Hurst, Joan Crawford and many more…

Growing up she was trained classically in piano and vocal and also played the flute and oboe in school. Now performs all over Detroit and surrounding cities. She's performed at Baker's Keyboard Lounge (5 years), Bert’s Eastern Market, Dirty Dog Jazz, Northern Lights Lounge, Motor City Wine, Cliff Bells, Arts Beats and Eats, Concert of Colors and a few more venues and festivals. Her vocal stylings are a mix of her classical training with Jazz, funk, soul, scat and fusion.