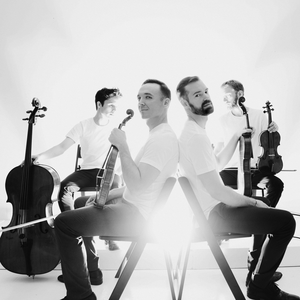 John L. Tishman Auditorium
63 Fifth Avenue, New York City, NY 10003
JACK Frontiers is a new annual series of concerts featuring recently commissioned works by Mannes School of Music's newest ensemble-in-residence JACK Quartet. JACK Quartet will kick off the inaugural season at The New School’s John L. Tishman Auditorium.
This concert series is the vehicle for JACK Quartet to bring distinctive voices that challenge the norms of concert music into conversation with our audiences. Crafted through years of close collaborative relationships and designed to bring new perspectives into the spotlight, JACK Frontiers introduces dynamic creators to our community and expands the notion of what a string quartet can be.
The inaugural concerts showcase the culmination of four commissioning projects from artists re-thinking musical structure and crafting resoundingly imaginative musical palates.
The 2019 JACK Frontiers composer-collaborators are Lester St. Louis, Clara Iannotta, Tyshawn Sorey, and Catherine Lamb.
December 17
Program:
Catherine Lamb, divisio spiralis (premiere)
Catherine Lamb deftly embodies both the musical yogi and the technically-advanced researcher; her sonic meditations cut through the superficial skin of the moment and dive into a new understanding of time and harmonic space. A student of Hindustani Classical Music and the West Coast experimentalism of James Tenney and Michael Pisaro, Lamb explores the interaction of elemental tonal material and the variations in presence between shades and beings in a room. To be present for her durational, meditative works is to have explored a state of being outside our modern onslaught. Her newest quartet has been made possible with a generous commission by Chamber Music America.
December 18
Program:
Clara Iannotta, dead wasps in the jam-jar (iii)Lester St. Louis, new workTyshawn Sorey, Everything Changes, Nothing Changes
Clara Iannotta has quickly risen to prominence in Europe as one of the leading voices of her generation. Her sensitive ear to complex musical sounds has led her to create unique instrumental images in sonic poetry. Iannotta’s finely-tuned explorations reveal a new material from which to build an instrumental language. Jack has maintained a close relationship with her for several years, collaborating on two commissions and performing all four of her string quartets. This new work was commissioned with generous support by the Ernst von Siemens Music Foundation.
Lester St. Louis is a New York City-native cellist, composer, and intellectual. St. Louis rethinks how ideas are executed on stage through improvisational strategies and critical research, as well as a deeply humanistic and embodied relationship to sound. JACK and St. Louis have been engaging in readings and collaborative workshops for two years as they edge toward this milestone first novel. This is St. Louis’s first string quartet and is made possible by a grant from the Jerome Fund for New Music (JFund).
Tyshawn Sorey is a multi-instrumentalist and composer, already legendary for his unspeakable instrumental command, deep embodiment and memorization of the most involved scores, and a singular combination of formalistic structure and improvisation in his compositional work. Commissioned by the Banff Centre for Arts and Creativity, his first string quartet explores a shifting harmonic field controlled by the knife’s-edge precision of Sorey’s chess-master mind. In Everything Changes, Nothing Changes, shifting orchestrations and harmonic revelations unfold into a new state of musical thought and mental space for the audience to inhabit and meander.
About JACK Quartet
Free and open to the public.
Hosted by the College of Performing Arts at The New School.
View All Jack Quartet Tour Dates
Find hotels and vacation rentals near John L. Tishman Auditorium in New York City
About Jack Quartet
Genres:
Classical
Band Members:
Jay Campbell, Christopher Otto, John Pickford Richards, Austin Wulliman
Hometown:
New York, NY
Deemed "superheroes of the new music world" (Boston Globe), the JACK Quartet is "the go-to quartet for contemporary music, tying impeccable musicianship to intellectual f...
Read More
Official
Facebook
Twitter
Instagram
YouTube
Soundcloud