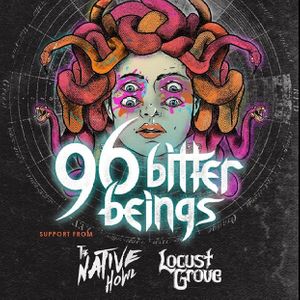 For The Music Productions

96 Bitter Beings officially announced their formation on the day that Deron Miller's (guitar/vocals) grandmother turned 96 on September 1st 2016. The name also refers to what is without a doubt the most popular song Miller has written so far, "96 Quite Bitter Beings", released by his former band CKY on their debut album Volume One in 1999. After endless touring worldwide from 1999-2012 and 1,000,000 records sold the band quietly disbanded and fizzled out (the usual "irreconcilable differences"). After having met rhythm section brothers Tim (drums), Shaun Luera (bass), and Kenneth Hunter (guitar), things started to take serious shape after this new Los Angeles based line-up recorded a 20th anniversary 3rd album "Galactic Prey" for Miller's cult classic side project metal band Foreign Objects. After the success of this album, the group sought to set the goal of recording 2 new albums in the genre defying RnR style Miller exhibited on the 4 classic albums he wrote with his former group. The first album, recorded for die hard fans and self-released in October of 2018 was issued in a limited edition digi-pak cd as well as a vinyl issue of 500 currently in production and in the pre-order stage for a late 2019 release. The 2nd album, "Synergy Restored" is completed and in the can and due for release in early 2020. This album, produced by Deron and Kenneth at Manifest Productions is said to be, by the handful of people that have heard it, by far the best work of Miller's career, with a dark, Bloodrock/pop sound featuring a crystal clear mix and organic performances rarely heard on albums recorded on computers. The band retains the storytelling type lyrics on new classics such as "Wish Me Dead", "Vaudeville's Revenge", "90 Car Pile-up" and "Your Bedtime Story", as well as the well crafted arrangements and intricately hooking guitar riffs that will stun new and old fans alike. The band has just hooked up with worldwide booking agent Satellite Touring and endorses the world's finest guitars Esoterik. 96BB is also in the middle of securing a deal with the legendary rock metal label Nuclear Blast for the release of "Synergy Restored" as well as re-releases of other catalog albums in digital and physical formats.
View All For The Music Productions Tour Dates
Find hotels and vacation rentals near MOHAWK PLACE in Buffalo