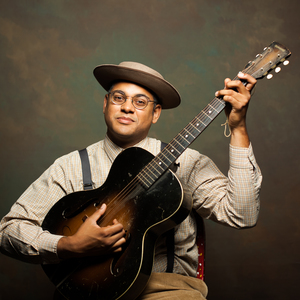 Caffe Lena
47 Phila St, Saratoga Springs, NY 12866
5 RSVPs
GRAMMY Award Winner, Two-Time EMMY Nominee, 2019 WAMMIE Award Winner Dom Flemons is “The American Songster.” He mines 100+ years of folklore, ballads, and tunes to tell a story of America not often heard. In doing so, he has led a revival of traditional music for a new generation. He began this work with his GRAMMY-winning African-American string band Carolina Chocolate Drops. After leaving the group he continued to explore the overlooked corners of our national story and came out with Black Cowboys, the songs of African-Americans who helped settle the West after the Civil War. The album earned a GRAMMY nomination in 2019. On stage Flemons is a gentle and plainspoken master of stories, songs, a vast array of folk instruments including banjo, fife, guitar, harmonica, jug, bass drum, quills (pan pipes), and bones.