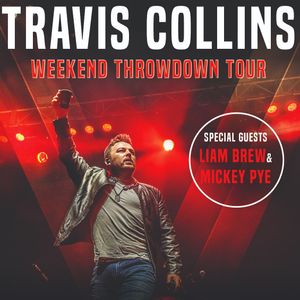 Johnny Ringo's Queensland
560 Queen St, Brisbane City, Australia
88 RSVPs
TRAVIS COLLINS set to crank up the party with ‘Weekend Throwdown’ Tour.. stopping in for a crazy one night only at 'Johnny Ringos' Brisbane!

After a hugely-successful couple of years full of #1 Albums, hit singles, sell-out shows, and bagging a swag of Golden Guitars, CMC’s and an American CMA Award, Travis Collins announces what he says will be his most fun and memorable tour yet – the WEEKEND THROWDOWN tour.

‘’This tour is about having a big time with good mates - from the fans in the crowd, to us onstage. Everybody, together.
It’s a slick show, of course.. but it’s also much more of a party than we’ve ever toured before. It’s a real ‘on your feet, drink in hand, singalong’ kind of show”