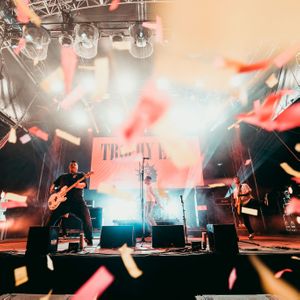 The Triffid
9 Stratton St, Brisbane, Australia
494 RSVPs
After a tidal wave year on the back of their critically acclaimed third full length album The American Dream and breaking the triple j Hottest 100 with their single You Can Count On Me Trophy Eyes have announced the Figure Eight Tour which will see the group bring with their explosive live show and emotionally driven genre defying songs to the east coast this Summer.

Giving fans their first chance to see the anthemic powerhouse on an Australian headline tour in over a year, Trophy Eyes have spent the time selling out dates globally, touring with the likes of Bring Me The Horizon, DMAS, Billie Eilish, The Story So Far & The Used along with setting alight some of the world’s most renowned festival stages.