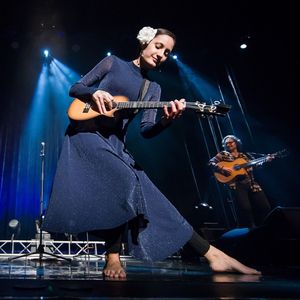 World music's hottest rising star brings her full palette of artistic color to The Hamilton Live with her quartet and Polynesian dancer on Wednesday, January 22.

"Taimane rocks the stage with a sensual vibrancy and a white-hot talent that captivates and beguiles!” - Pierce Brosnan (aka 007)

“My first pick is a woman from Honolulu...Taimane Gardner...I entered this room...and she’s playing the ukulele like you would not believe. She can do so much with this tiny little instrument.” - Katie Presley, NPR’s “Pop Culture Happy Hour” - “Music Discoveries from SXSW 2019” Episode

"I didn’t see anyone at the [SXSW 2019] festival doing anything close to what she [Taimane] does on stage. She shreds on ukulele and rocks everything from Beethoven to Led Zeppelin. Somehow she manages to not only rock out but connect the audience with meaningful Hawaiian traditions and dances." - Austin American-Statesman

Now is your chance to catch ukulele virtuoso and rising star, Taimane, in fresh and full blossom as she brings her robust repertoire of music and dance to D.C. for a one-night-only performance on January 22. Born and raised in Hawaii of hapa Samoan descent, Taimane is renowned for both her pyrotechnics on the four-string island staple and prowess in using music and movement to paint vibrant images that elicit deep emotional response. From Bach to rock, flamenco infernos to tribal hymns, Taimane lights up the stage like no other.

Since setting her sights beyond the Hawaii horizon in 2017, Taimane has wowed ever larger audiences including performances alongside Michael Franti to over 10,000 people at both Red Rocks and The Gorge Amphitheatres and her own show in front of 20,000 at the Staples Center in Los Angeles. At SXSW 2019 in Austin, TX, Taimane’s rise hit high speed with NPR and other media hailing her as one of the standout artists of the mega festival. She continued to soar thereafter garnering the spotlight from Reuters News Agency, experiencing an explosion of new fans around the globe (over 250,000 online followers and counting), packing venues across Europe and selling out all five of her summer concerts in North America. 2020 looks on-track to further propel Taimane as she kicks off the year performing at one of the most acclaimed venues in Germany, the 2,200-seat “ Elbphilharmonie ,” records an episode of NPR’s Tiny Desk series, returns to SXSW and sees a taping of her sold out 2019 Berkeley concert broadcast on select PBS television stations nationwide.

Come experience Taimane’s beauty, grace and fire and see why she is quickly becoming a global cultural beacon.