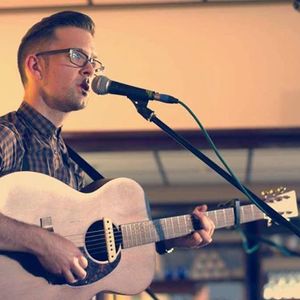 The Big Comfy Bookshop
Far Gosford St, Coventry, United Kingdom
*Three times Best UK Venue 2016, 2017 & 2018* (Laurel Canyon Music)
*Winner of Best Cafe in Warwickshire/Coventry 2017 & 2018* (What's On Magazine)
*One of the UK's best small venues* (The Guardian)
Comfy & Acoustic, our showcase of the UK's best folk, acoustic, Americana and singer-songwriters, every 1st and 3rd Friday of the month
Stylusboy
Since the release of his critically acclaimed debut album 'Hospitality for Hope' in 2015, Stylusboy has continued to drive his songwriting and creativity with the release of several EPs as well as a live album recorded in a manor house deep in the Derbyshire countryside. Steve's Fine Art background inspires the fact that all of his releases have unique handmade sleeves lovingly made by Steve himself, all part of the Stylusboy 'handmade indie folk' style.
Stylusboy's sound of 'arresting melodies and poignant lyrics' (Right Chord Music) has received praise and accolades from the likes of Acoustic Magazine, R2 Magazine, For Folks Sake, God is in the TV as well as BBC Introducing, 6Music, Xfm and Amazing Radio. Champion of independent music, Tom Robinson from BBC 6 Music, has described Stylusboy as A leading light among today's new generation of DIY digital troubadours
Dan Hartland
Dan Hartland's songwriting has been described as absolutely gorgeous by BBC Introducing, delicately lovely by Americana UK and as offering a fine balance between heartache and joy by Maverick magazine. He has most recently supported the likes of Americana and folk luminaries Mark Olson, Kim Richey and Lisbee Stainton and has earned a unique reputation as both a dynamic performer and thoughtful songsmith.
Gathering folk and roots influences from both sides of the Atlantic, and adding a knowing pop sensibility to his melodies and hooks, Dan puts feeling at the heart of every song. With a keen eye for character and a subtle turn of phrase, onstage Dan's kinetic guitar picking and witty storytelling cut through the usual tropes of the lonesome troubador, situating the sensitivity of his songs within often wry, quirky contexts.
Crybb
Crybb draw on a steadily increasing repertoire of Self penned songs inspired by the county of Northamptonshire and wider world, as well as drawing from the vast well of traditional songs and music. They have a vast array of influeneces between them, but include All about Eve, Ralph McTell, Show of Hands, Suzanne Vega and Terry St.Clair, amongst others. With two albums to their name, they continue to grow as writers and performers and find themselves in more and more demand
Stage times:
Crybb 8pm
Dan Hartland 8.50pm
Stylusboy 9.40pm
Become a member of our Comfy & Acoustic club for just £25 per year. Members receive half price entry to all Comfy & Acoustic shows plus discounts of other shows.
No food or drink will be allowed on the premises. We have a bar serving hot and cold drinks, beer and wine.
View All Stylusboy Tour Dates
Find hotels and vacation rentals near The Big Comfy Bookshop in Coventry
About Stylusboy
Genres:
Folk, Indie Folk
Band Members:
Steve Jones - Vocals and guitars
Hometown:
Coventry
Stylusboy, Coventry singer-songwriter Steve Jones, creates lo-fi folk music influenced by cult contemporary songwriters like Damien Rice and Ryan Adams as well as classic...
Read More
Official
Facebook
Instagram