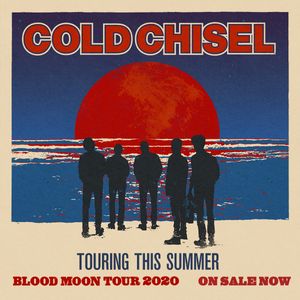 Since their legendary Last Stand way back in 1983, Cold Chisel has reformed for just four national tours, but they almost always played indoors and those gigs didn’t happen over the holidays.

Now, for the first time ever, this legendary Australian band will be playing 14 very special outdoor shows in Australia and New Zealand during summer. Between New Year’s Eve and the second weekend of February, they’ll do gigs on the beach, gigs by the river and gigs in the bush. You’ve never seen anything like it before. You’ll never see anything like it again.

WHAT I SAW WAS GREAT! ALAS FROM CLOSE TO STAGE I GOT ILL SUDDENLY. SECURITY WERE VERY CARING+ I APPRECIATE THAT A LOT. THANKS TO A STRANGER NAMED TANYA I RECOVERED! CHEERS BERNICE