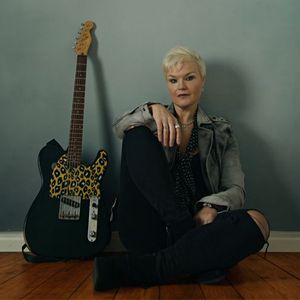 The Voodoo Rooms
19a W Register St, Edinburgh, United Kingdom
17 RSVPs
Birmingham-based Rebecca and her band are a ‘must see’ live act that often leaves newcomers simply blown away by the power of the performance.

With her co-writer Steve Birkett alongside her, a very tight band behind, and Rebecca’s powerful voice to the fore, the 5-piece outfit performs original rock/blues tracks from the EP Real Life, the highly-acclaimed debut album Back To The Start, the superb second album Believe and the stunning new studio album More Sinner Than Saint, punctuated by one or two classic covers.

Rebecca was born and grew up in Wolverhampton. She first started performing live music when aged 13 and as a teenager wrote and performed her own material.

The current band started when she linked up with Steve Birkett a few years ago – a partnership that ‘clicked’, to the intense excitement of those around the pair. Their core genre was the Blues, but right from the start they have stretched their music in the direction of rock and that move is set to continue.

The new studio album More Sinner Than Saint is released on 24 May 2019. The approach to this has been very careful and considered, with a lot of focus on making sure that the end product is a true representation of the vision of the songwriters. At the outset Steve and Rebecca took advice from Chris Kimsey, (Producer of The Rolling Stones and Peter Frampton, amongst others) and after recording some of the tracks have been mixed by California-based producer Bill Drescher who has worked with artists such as Rick Springfield, Spinal Tap and the Allman Brothers Band as well as producing the music for the hit TV series Stranger Things. The songwriters believe that the new material is very much of a style and production that really delivers the vision they have of their music. It has received considerable acclaim from fans and reviewers alike and tracks from it will feature strongly in the set.

Support is from Cow Cow Boogie, an Edinburgh based band who play their own brand of 1940s/1950s R&B, Western Swing, Rockabilly, Country & Jump Blues, that'll get your feet tappin’ and the party started!

Birmingham-based Rebecca and her band are a ‘must see’ live act that often leaves newcomers simply blown away by the power of the performance. With her ...
Read More
Official
Facebook
Twitter
Instagram
YouTube
iTunes
Spotify
Webstore
Fan Club