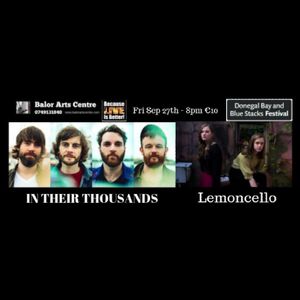 Balor Arts Centre
Main St, Ballybofey, Ireland
Since first coming together in 2012 In Their Thousands have established themselves as one of Donegal’s finest ever bands. The quartet of Aidan and Declan McCafferty, Ruairí Friel and Martin Smyth have produced 4 EPs of epic, finely crafted songs such as Carrickatine, Vive La Revolucion, Flicker and The Old Man and the Sea. Their first full length CD Acrasia – recorded at Attica Studios, Termon was released earlier this year to acclaim that matched the anticipation of a fervent fanbase.

Lemoncello are the Donegal/Carlow duo of Claire Kinsella and Laura Quirke. They make music using four basic ingredients – guitar, cello and two voices. They released their debut EP Stuck Upon The Staircase in 2018 and have since performed all over Ireland including Other Voices, Body and Soul and Belfast’s Cathedral Quarter Arts Festival. Their 2nd EP is due out this autumn.
View All In Their Thousands. Tour Dates
About In Their Thousands.
Genres:
Alternative, Rock, Folk
Hometown:
Rosguill, Fanad & Malin Co. Donegal, Ireland
Four piece alternative rock band from the north-west Atlantic coast of Co. Donegal, Ireland. Two brothers, their first cousin, and a lifelong friend making deep, epic but...
Read More
Official
Facebook