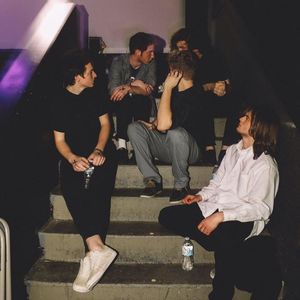 May Festival
Lovettsville, Virginia
Hungry on Monday plays 5:30-7:00 pm at Lovettsville May Fest

Hungry on Monday is a homegrown, alt-rock band that merges funk, hip hop, and some elements of jazz to create a fresh, electrifying sound. In the short time since their inception, the band has gone from playing the Loudoun Valley High School auditorium to The Hamilton, a premier venue in Washington DC.

So what makes a successful band? The answer isn’t straightforward but it includes lessons and parent support, an available garage or basement space, a vehicle big enough to lug equipment, genetics (which most likely drives the passion), mutual respect and a special connection among band members.
View All Hungry on Monday Tour Dates
Find hotels and vacation rentals near May Festival in Lovettsville
About Hungry on Monday
Genres:
Rock, Alt, Fusion
Band Members:
Nathan Dahlman, Ted Gallegos, Aidan Bruecken, Noah Poncin, Michael Preston
Hometown:
Washington, D.C.
Hungry on Monday is an alternative pop-rock group currently based in northern Virginia.